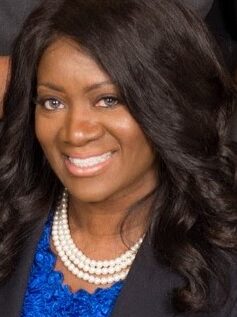 Dawn A. Lott, President-Elect, is a lifelong resident of Long Island, obtained her Bachelor of Science from Cornell University, School of Industrial and Labor Relations, and her Juris Doctorate from Benjamin N. Cardozo School of Law.

As an attorney, the majority of Ms. Lott’s legal career has been in private practice concentrating in matrimonial, employment and labor, and corporate/commercial litigation. She was Of-Counsel to Bart & Schwartz, LLP, and later joined the law firm of Dandeneau & Curto, LLP. In 2005, Ms. Lott’s partnership with Dandeneau & Lott was established such that, as partner, she handled employment and labor law, civil rights, corporate and commercial, and matrimonial litigation, in addition to appellate work in Federal and State Courts.

Ms. Lott is currently the Executive Director for the Suffolk County Human Rights Commission where she strives to ensure that the Commission continues to be a vital vehicle for the enforcement of human rights for the approximately 1.5 million Suffolk County residents. As Executive Director, Ms. Lott has drafted and implemented legislation that strengthened the County’s human rights laws, including the RISE Act, which prohibits employers from inquiring into a candidate’s salary history, the “ban the box” law eliminating a criminal history checkbox from appearing on job applications, and the prohibition of discrimination based upon physical attributes such as protective hairstyles. In 2019 Ms. Lott was named Oustanding Woman in Law by Hofstra Law.

In addition to WBASNY and her legal career, Ms. Lott remains active in numerous associations and is committed to giving back to her community. Currently, she serves as Vice-President of Development the National Women’s Political Caucus (NWPC) and Vice-President of NWPC New York Caucus; Board of Directors member and Past President of the Amistad Black Bar Association of Long Island; 2nd Vice-Chair of the Girls Scouts of Suffolk County, Associate Mother of Jack and Jill of America, Inc., member of the National Coalition of 100 Black Women, Long Island Chapter, Inc., member of the NAACP, member of Zeta Phi Beta Sorority, Inc., Rho Omega Zeta Chapter, and Jr. Moxxie Mentor.

Ms. Lott believes “to whom much is given, much is required.”