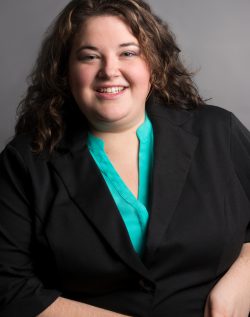 Heather Neu is a staff attorney for the Family Law Unit of the Legal Aid Society of Rochester. She currently handles family offense, custody, and support cases for survivors of domestic violence. Ms. Neu states that she found her purpose working exclusively with domestic violence survivors – obtaining protection for them from their abusers through orders of protection or financial support and explaining the complex family court system while navigating the same alongside them.

Ms. Neu created and co-chairs Legal Aid’s Diversity & Inclusivity Committee, which employees approximately 80 people. The initiative educates employees in cultural competency and identifies immediate concrete changes to accommodate, and encourage the growth of, a diverse clientele. She is also actively involved in the Rochester Monroe County Domestic Violence Consortium’s Diversity Committee, where she is helping develop the curriculum for several trainings as well as spearheading a project to collect top-level demographic information of the clients served by member agencies to identify gaps in service.

In 2015, WBASNY presented Ms. Neu the Doris S. Hoffman Outstanding New Lawyer Award and in 2014, she received The Daily Record’s “Excellence in Law: Up & Coming Attorney” Award. In 2019, Heather was selected to participate in the Shriver Center Leadership for Justice program.

Ms. Neu is proud to live in the City of Rochester, but travels frequently to Erie County to spend time with her niece, Nora.