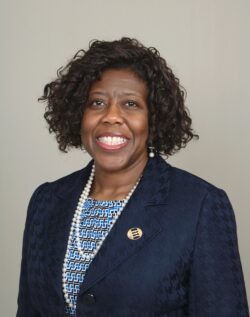 Joy A. Thompson has been an active member of WBASNY and the Brooklyn chapter since 2009. She joined the Brooklyn Board in 2010, immediately serving as the Recording Secretary, from 2010 to 2012, and went on to serve as a BWBA Vice President in 2016. In 2017, she became a statewide officer, serving first as Corresponding Secretary and then as a Vice President. In 2012, she received WBASNY’s Doris S. Hoffman Outstanding New Lawyer Award, which she considers a highlight of her career.

Ms. Thompson is active in promoting the integrity and diversity of the legal profession. She chairs the Diversity Committee of the Brooklyn Bar Association and serves as the Secretary of the Legislative Affairs Committee of the Women in Law Section of the New York State Bar Association. She is a volunteer with the Brooklyn Legal Pipeline Initiative and is a member of the Manhattan chapter of Soroptimists International. She is a former mentor with Big Brothers Big Sisters NYC. Recently, Ms. Thompson was appointed to the Committee on Character and Fitness for the 2nd, 10th, 11th and 13th Districts (Appellate Division, 2nd Judicial Department).

In her professional capacity, Ms. Thompson serves as a “fiduciary of last resort.” Appointed by the Surrogate’s Court in February 2011, she serves as the Deputy Commissioner of the Public Administrator – New York County.

A native New Yorker, Ms. Thompson was raised in Crown Heights, Brooklyn. After completing her sophomore year at Edward R. Murrow High School, Ms. Thompson moved to North Carolina, where she graduated from Rocky Mount Senior High. She went on to earn B.A. degrees in Journalism and English from the University of North Carolina at Chapel Hill (1987). A career in newspaper journalism took Ms. Thompson from North Carolina to Southern California to Northern Virginia, during which time she received several professional writing awards. In 1998, she joined the Editorial Board of the USA Today newspaper, where she helped edit the Opinion Pages. Ms. Thompson worked for USA Today until 2005, when she decided to pursue a law degree.

Ms. Thompson received her J.D. in 2008 from William & Mary Law School in Williamsburg, Virginia, where she served as Co-Chair of the Institute of Bill of Rights Law (Student Division) and Symposium Editor of the William & Mary Bill of Rights Journal. Immediately following graduation, from 2008 through 2010, Ms. Thompson clerked for the Hon. Carol R. Edmead in the Civil Branch of New York County Supreme Court. Her life’s pursuits ultimately led Ms. Thompson back to Crown Heights, where she currently resides. She is licensed to practice law in New York and New Jersey.