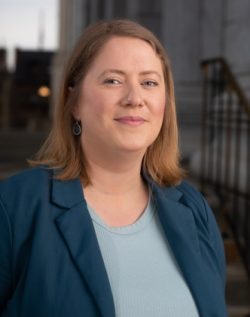 During her undergraduate and law school years, Rebekah worked as a legal secretary and as a facilitator for an anger management/batterer’s intervention program working with domestic violence offenders. While in law school, she prosecuted domestic violence and sex offense defendants, worked for the presiding judge of the Domestic Violence Part at Albany City Court, and later represented survivors of domestic violence in Family Court proceedings.

Thereafter, Ms. Kennedy worked for more than a decade for the Town Attorney’s Office for the Town of Colonie. Currently, she works as the first female Majority Counsel for the Albany County Legislature.

Ms. Kennedy joined the Women’s Bar Association of the State of New York (WBASNY) and the Capital District Women’s Bar Association (CDWBA) after law school and became active almost immediately, serving as Chair of many CDWBA committees over the years, including the Mentoring, Membership, Newsletter, and LGBT Committees. She became a Board member in 2010, and later served multiple terms as Treasurer and First Vice-President before being elected the 38th President of the CDWBA. Following her presidency, Rebekah returned to the CDWBA Board as a Board member.

She Kennedy is also an active member of WBASNY, regularly attending WBASNY meetings as a Delegate for several years and served as the WBASNY Newsletter Chair from 2014 to 2022..

Ms. Kennedy is a long-time member of the Third Department’s Committee for Character and Fitness, acts as a mentor for Albany Law School students, and served as mock trial coach for the Academy of the Holy Names. She also volunteers with The Legal Project and with the Legal Aid Society. Ms. Kennedy was previously named Outstanding New Lawyer by the CDWBA.

Rebekah lives outside of Albany with her husband, Ed, their two foster daughters, and a variety of cats.